Villepin opens its doors with an exhibition of work by the late artist Zao Wou-Ki, the Chinese painter most celebrated for his embrace of Eastern and Western artistic traditions. Titled ‘Friendship and Reconciliation’, the exhibition aims to address not only Zao Wou-Ki’s creative resolution of disparate cultures and painterly styles but also the friendships he formed with fellow artists and collectors throughout the course of his career – friendship being a core value that stands at the heart of Arthur and Dominique de Villepin’s new gallery. The exhibition also marks the centennial anniversary of the artist’s birth.

Through rare works from the 1940s to the early 2000s, including a selection of large-scale oil paintings, watercolours Chinese inks and lithographs, the exhibition will tell the story of Zao Wou-Ki’s life and the evolution of his practice, from his background as a drawing instructor in Mainland China and early figurative tendencies to an iconic mid-century painter known for his abstract and gestural works.

Through his use of bold lines and swirls of highly saturated colors, combined with elements of Chinese calligraphy, Zao Wou-Ki’s paintings mark an exemplary reconciliation between Chinese and Western aesthetics, in which the language of modern abstraction is enriched by Asian traditions deeply rooted in the past.

Arthur de Villepin is the chairman and co-founder of Villepin, as well as an entrepreneur and avid collector of art. The son of former French Prime Minister Dominique de Villepin, Arthur grew up surrounded by artists. His mother is the celebrated sculptor Marie-Laure Viebel de Villepin and his sister, Marie de Villepin, has established a successful career as a painter. Throughout his childhood and extensive travels, Arthur was introduced to many leading artists, including Zao Wou-Ki, Anselm Kiefer, Myonghi Kang, Pierre Soulages and Miquel Barceló, all of whom trained him to see art through the eyes of artists rather than the market. This experience had a profound and lasting effect on Arthur, nurturing a passion for collecting based on close friendships with artists. The launch of Villepin is a natural evolution for Arthur, who has pursued art activities through parallel initiatives under the Art de Vivre Group. The new gallery will launch in Hong Kong, where Arthur has been based for the past ten years. Together with his father, he has nurtured strong friendships with artists from the region, developing unparalleled expertise in the Asian art market.

This lively exhibition will highlight the diversity and talent of these local individuals, bringing attention and thought to what defines a Hong Kong artist. With a rich history as a backdrop, the question of whether there is a common thread that links this group of artists may be seen in the correlation between context and independent artistic growth. Spanning close to three quarters of a century between the exhibitors, this exhibition hopes to explore and illuminate this question. Working with various forms of media ranging from ink on paper, seen in the works by masters Lui Shou-Kwan, Irene Chou, Fang Zhaoling, Wucius Wong, Kan Tai-Keung, Fung Ming-Chip, to multimedia such as steel, ceramic, bamboo and digital media by sculptors Kum Chi-Keung, Man Fung-Yi, Rosanna Li, Danny Lee, Mok Yat-San and Fiona Wong. In addition, the exhibition will also have artwork displayed by emerging artists Cherie Cheuk, Zhang Xiaoli and Ling Pui-Sze, Hui Hoi-Kiu.

The second tour will be led by Daphne King, director of Alisan Fine Arts and curator of this show. Daphne graduated from Philips Academy, Andover and the University of Pennsylvania with a BA in History. After graduation she worked in the advertising industry in New York and Hong Kong. In 1996, she joined Alisan Fine Arts and was promoted to Director in 2005; in 2011 she formally took over operations at the gallery.

Daphne was a Friend of the Hong Kong Museum of Art from 1997-2000 and is currently a Trustee of the Friends. In 2011 she was appointed Director of The Ink Society and now serves as Vice-Chairman. She has been a keen supporter of the Hong Kong Ballet since 2002, serving as co-chair of the Ballet Guild from 2011-2015, and was a board member from 2012-2017. Since 2015 she has been a patron of Asian Cultural Council Friend’s Circle and is a co-chair of their fundraising gala. In 2016 she was appointed Director of the Association Culturelle France Hong Kong Ltd. Daphne founded the University of Pennsylvania Scholarship Fund in Hong Kong, serving as President from 2002-2014. In recognition of her success as an art visionary, she received the 2018 Women of Hope award in the category of Art and Culture, and in the same year was invited by Net-a-Porter as a guest speaker for their “Incredible Women Talks.” In 2019 Daphne was selected by the World Women Leadership Congress for the Hong Kong Women Leadership Award. 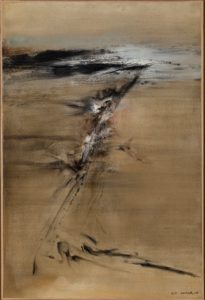